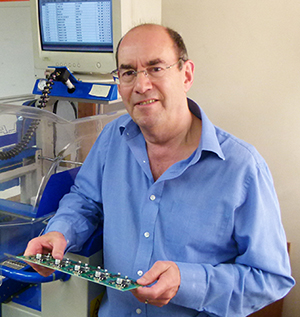 For more than 30 years, Kenton Electronics has designed and built ingenious, easy-to-use MIDI interfaces that enable keyboard players and electronic musicians to keep their synths, sequencers and controllers communicating with each other, regardless of their type or vintage. Widely acknowledged as the MIDI experts, Kenton has a device for almost every conceivable application, and our products are often considered to be the ‘glue’ that holds our customers’ electronic music systems together. In addition, broadcasters and theatres rely on Kenton products in mission-critical applications where MIDI is used as a switching and control protocol.

Kenton Electronics was formed in 1986 by UK musician John Price. “I was a professional keyboard player with a background in electronics and a keen interest in computing. I owned an Oberheim OBX synth, which I very much wanted to get MIDIed. Unfortunately, the only interface on offer cost a fortune, and did very little, so I decided to do make my own. This was not quite the big step it might seem, as I had already built my own digital interface to enable me to play the OBX from the keyboard of my Hammond Organ.

The new MIDI interface was a success, and I soon had several of my keyboard-playing colleagues asking if I could do something similar for their keyboards, so I decided to build a small batch of 12 interfaces and things just progressed from there. From the moment I bought a fax machine, I started to get enquiries for kits from overseas. I was working from my flat in Kingston at that time, but I was rapidly running out of space. In 1990 I found premises in Hook Road Surbiton, an upstairs office with 4 rooms behind a parade of shops.

A singer friend of mine, Karen, offered to help me to prepare the place and make it a bit more welcoming, but as things turned out, Karen stayed on and worked part-time for Kenton for a couple of years.

People often ask where the name Kenton came from. My father Wylie Price was a bandleader in the 40s & 50s and was a big fan of Stan Kenton, so when I was born, I was given Kenton as my middle name.”